There are two graves in situ in the ruins of Monk Bretton Priory which are of considerable interest to myself and indeed to all the Bretton family. The first of these was disinterred from the floor of the presbytery in 1926 by Dr Walker and is described on page 84 of “Monk Bretton Priory” published by the Yorkshire Archaeological Society in 1926. It states :-

“In the floor of the Presbytery are found three interments: opposite the aumbry in the south wall was a large stone coffin without a lid which contained much red dust and measured 5 feet 18 inches (sic) in length, 15 inches at the top and 9 inches at the foot (inside); closely adjoining the stone coffin on its south side was one made of squared stone slabs jointed together which contained a well preserved skeleton of a female. It is probable that these two coffins held the remains of the founder of the priory, Adam fitz Swane and his wife. Exactly opposite to these two coffins on the north side of the presbytery was found a skeleton without any coffin, of a man with (sic) very massive skull and wide lower jaw. This may have been a much later interment in a wooden coffin which had perished”

A photograph of the possible coffins of the founder and his wife was facing page 84.

On page 90 of the same book are two drawings of the coffins of Sir William Bretton and his wife. These two graves are still visible in the ruins. The description reads :-

“The Chapter House was the usual place of burial for the superiors of a monastery ; just within the entrance lie two grave slabs, one bearing an elaborately incised floriated cross-head on a shaft with stepped base, but no inscription, measuring 6 feet 2 and a half inches long, 2 feet 2 inches wide at the head and 18 inches at the foot : the other 5 feet 10 inches long, 19 inches wide at the head and 16 inches at the foot bears an incised cross with floriated head within a circle on a stepped base, on the right side of the cross is a sword, over both shaft and sword a shield is carved and above the shield is inscribed D.W. BRETTON (“D” stands for Dominus – Knight). This Sir William de Bretton was son and heir to John Bretton of West Bretton ; his father was Richard Bretton as also was his grandfather (Chart., 19 {26}).

In 1444 Sir William de Bretton gave to Thomas Haryngton, esquire, and other trustees, certain lands and tenements in Monk Bretton which his father and grandfather had leased to the prior and convent for a term of years. 1 Nov., 23 Hen. VI Ib., 18 (24)

On 4th November following these trustees released to Richard Ledes, prior of the monastery of Blessed Mary of Monk Bretton these same lands and tenements Ib., 19 (25) This gift was probably made on the understanding that the donor should be buried within the priory walls.”

Whilst there is still no clear unbroken link between Ailric, Swain and Adam and the present generation of the Bretton, Britton etc etc etc families there is sufficient evidence, based on the “balance of probabilities” (the Civil Law requirement), rather than the more demanding “without reasonable doubt” (Criminal Law requirement) to suggest that there might be a link between Adam fitz Swane , or Swein, Sir William Bretton and our present generation. With the advances in DNA testing that have taken place over the last few years it was an extremely interesting proposition to follow up.

Accordingly I wrote to English Heritage who have responsibility for the site at Monk Bretton to see whether the “red dust” mentioned in the possible grave of Adam fitz Swane had been sampled and retained. And, if so, could I, at my own expense, arrange to have the dust (providing it was body parts) DNA tested and compared with my own ?

I received, very quickly, a reply from a Mr. Chris Chandler of English Heritage National Monument Records Enquiry and Research Services (Archaeology). He gave me a wealth of information from their records about the original excavations at Monk Bretton in 1926 (long before English Heritage became responsible). He told me that Sheffield Museum were named on their records as the “Finds Keepers” for those excavations and suggested I get in touch with them. However he held out very little hope that the “red dust” would have either been sampled or retained from that date.

I spoke to Miss Jill Woolrich, an Archaeologist at Sheffield Museum who was again extremely helpful. Unfortunately, however, there was no sample of Red dust in their possession or of anything remotely like body remains. The “Finds” in their possession were mainly window glass etc and were only given to them some 30 years after the original excavations.

I then informed English Heritage and told them that I still wanted to have a DNA sample taken and asked whether English Heritage would keep such records until (if it ever happened) that they might conceivably open either “Adam fitz Swain’s grave” or Sir William de Bretton’s – and then take and compare the samples of DNA with mine. They replied that “this was not what English Heritage was about”.

My intention was to provide an analysis of DNA and not an actual sample and whilst it is very doubtful whether either grave will be opened in my lifetime it would still have been of interest to future Brettons/Brittains etc. I was extremely disappointed. It would no doubt be of interest to John Bretton (of the Essex Brettons) some from Bristol and the Brettoners from Australia and New Zealand and  some other spellings as well.

I have now had my DNA tested and recorded. The testing was done by “Family Tree DNA” (address available on the net) and there are Bretton DNA groups and Brittain etc DNA groups and if anyone is interested they can get in touch with me and I, as the group co-ordinator will OK it. They can then get in touch Family Tree DNA and take it from there. Alternatively they can get in touch with Elizabeth Brittain who has made great progress in developing DNA comparisons for the Brittain etc family. If anyone wants further information I’ll be pleased to provide it. If there are any matches then the Bretton family history is yours as well – even if the links are lost in antiquity.  If (and it will not be in my lifetime) either of the two graves in the ruins of Monk Bretton priory are opened it would be marvellous if current (at the time) Brettons, etc could check their DNA against people who lived in the 1100’s and the 1400’s. I am conscious however of the scale of the problem. It is possible for someone of the right name who was in fact descended from the families of either or both of these two people to have different DNA. There is no way of knowing, for me or for anyone else, that all their female ancestors, married to Brettons etc were entirely faithful to their spouses. It only needs one person, on one occasion over 1000 years to have gone “astray” to have introduced “foreign” DNA into that Bretton line. Anyone who thinks they can be sure that never happened – please step forward   J

However, with that proviso I wrote a final request to the Chairman of English Heritage, Sir Laurie Magnus in September 2013 to keep my details in case either of the graves was ever opened. I knew it would not be in my lifetime and maybe not even in the lifetimes of any of my current family. It might not even be a match with my DNA but if this ever comes to fruition and just one person with a variation on the Bretton name matches the DNA found it will be worth all the fifty odd years Christine and I have spent on Bretton Family History.

Sir Laurie sent the following, marvellous reply and I am truly grateful to him. I have asked my family to keep the Bretton Family History on line ad infinitum and hope that some member of English heritage will someday contact the then custodian of the site and   be able to compare DNA. To this end I shall add my 37marker DNA readings to the Bretton family history site for comparison and hope that they will also make it widely known to all bearing a variation of the Bretton name for checking. I am extremely grateful to Sir Laurie and would not wish anyone to put English Heritage to the trouble of answering un-necessary questions so I hope readers will abide by this request and refrain from troubling them. I have every confidence that any grave opening will be publicised fully and that English heritage will fulfil their promise.

If it ever does happen and a match is made as a result I hope that the person/persons so favoured will raise a glass to Sir Laurie and to English Heritage. 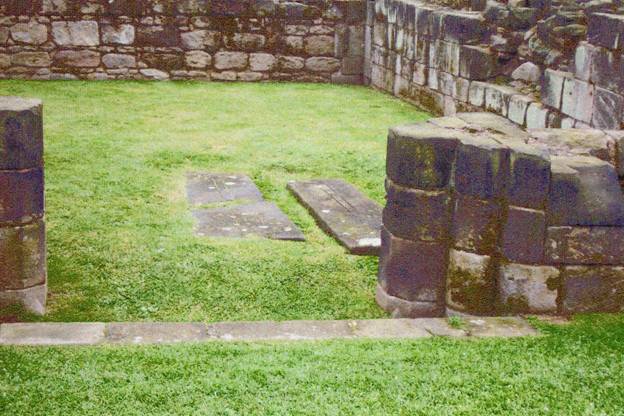 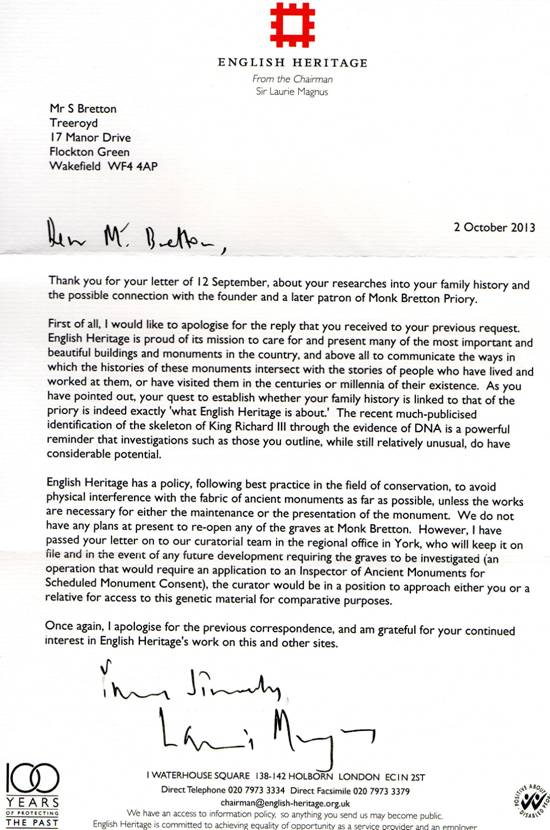 This site contains years of research on the Bretton family